How many linear measurements do you need to (efficiently) recover a low rank matrix? What about a sparse vector or an orthogonal matrix? Given that we know our object of interest has some ‘structure’, can we answer this question in a general manner?

In this article, I will show you one approach to do so; regression using atomic norms. Most of the material I will cover was presented in the paper, “The Convex Geometry of Linear Inverse Problems” by Venkat Chandrasekaran, et. al.

I will begin by describing the problem of structured recovery with a few motivating examples. I will then review some facts about convex geometry and what atomic norms are in this context. Next, I will show how these properties translate to sharp recovery guarantees, instantiating the framework with two examples; the recovery of low-rank matrices and orthogonal matrices.

There are several more examples described in the paper that I will not talk about. Notably, I will not cover the details about theta bodies, approximations that the authors present, which trade off sample complexity for computational efficiency.

Note. Unfortunately, I have not been able to manipulate Pandoc and MathJax to do equation and theorem referencing. A PDF version of this article can be found here.

The problem of recovering sparse but high-dimensional vectors from data (“compressed sensing”) has seen recent success in applications to genotyping, medical imaging and comes up commonly when dealing with sensor data. Similarly, the recovery of low-rank matrices and tensors has been used to analyze fMRI data. It also comes up in the recovery of signal from only the magnitude measurements (i.e. without phase), using the PhaseLift algorithm.

The Mixture of Linear Regressions 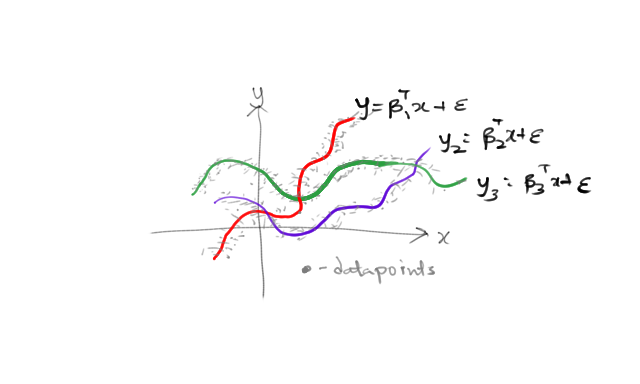 Personally, I came to be interested in this formulation from my work on applying the method of moments to the mixture of linear regressions, with Percy Liang. In that algorithm, we provided a consistent estimator for the discriminative model where we observe data \((y_i, x_i)\), where \(y_i = \beta_h^T x_i + \epsilon_i\) and \(\beta_h\) is one of \(\beta_1, \beta_2, \dots \beta_k\); we do not observe which and do not know what the \(\beta_h\) are. Of course, \(x_i\) could actually be features so the data could describe curves instead of lines, as depicted in the picture above.

The results of this paper allow us, conceptually at least, to extend this approach to efficiently recover the moments from some linear measurements.

I will now talk about the exact problem we are looking at. This needs some definitions.

Before we proceed, I will need to review a few simple but crucial concepts from convex geometry. 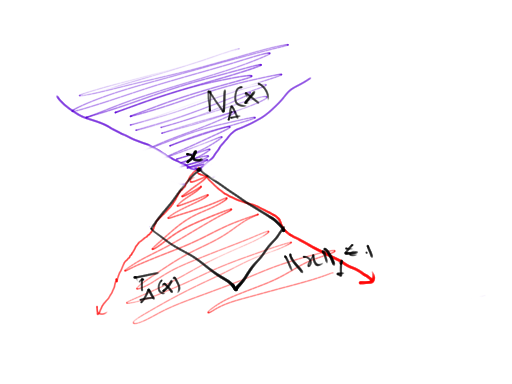 Note that the polar cone of the tangent cone is the normal cone, and vice versa.

We have finally come to the meat of this article; in this section, we will study how the properties of the atomic set, \(\mathcal{A}\), relate to difficulty of recovering \(x^*\).

The first result should illuminate why this approach will work.

(1. Exact Recovery) \(x^*\) is a unique solution to the exact optimization problem iff the tangent cone of the atomic norm at the minimizer and the null-space of the observation operator are transverse, \[ \begin{align} T_{\mathcal{A}}(x^*) \cap\textrm{null}(\Phi) = \{0\}. \label{transverse} \end{align} \]

Now, when we have noisy measurements, we need a stronger condition; that the measurement operator have a “noticeable” projection on the descent directions in \(T_{\mathcal{A}}(x^*)\).

\(\Phi\) is a random quantity, so we will have to show that with sufficient samples, the transversity conditions hold with high probability. Note that the assumptions for Lemma 2 subsume those for Lemma 1; it is sufficient for us to estimate a lower bound on \[ \begin{align} \epsilon &= \inf_{z \in T_{A}}(x^*) \frac{ ||\Phi z||_{\mathcal{A}} }{||z||_{\mathcal{A}}}. \label{min-gain} \end{align} \] This quantity will be referred to as the minimum gain of the measurement operator restricted to the cone \(T_{A}(x^*)\).

As we noted above, the number of samples required for recovery are determined by minimum gain of \(\Phi\). We will now characterize this quantity in terms of the Gaussian width of the tangent cone, defined below,

Yehoram Gordon (pdf) proved the following key result on when a random subspace escapes a “mesh” in \(\mathbb{R}^n\),

We are finally ready to state and prove the main theorem which shows that we need about \(w(\Omega)^2\) samples to exponentially convergence to \(x^*\). Theorem 1 gives us on the minimum gain that holds in expectation. To extend it to the finite sample regime, we’ll exploit the property that \(\Phi \to \min_{z \in \Omega} ||\Phi z||_2\) is Lipschitz (with constant \(1\)) and use the concentration of Gaussian measures to show convergence.

Note that in both cases, the convergence rates are exponential \(O(\exp(-n))\).

The main theorem shows that the sample complexity is pretty sharply bounded by the Gaussian width \(w(\Omega)\). The Gaussian width of a set is a very well behaved object with many useful properties. We will use these properties in the applications section, but you should feel free to skip the details here for now.

We have covered some fairly complex results in this article. To summarize, we showed the convex optimization problem exponentially converges after getting \(O(w(\Omega)^2)\) samples, where \(w(\Omega)\) is the Gaussian width of the tangent cone of the atomic norm \(T_{\mathcal{A}}(x^*)\) at the unit sphere. The Gaussian width has several useful compositional properties (just like the Radermacher complexity). To instantiate the framework, we just need to bound the Gaussian width of the atomic set. In this section, we will do so for two examples, orthogonal matrices and low rank matrices.

Every matrix \(M\) can be represented as the sum of a symmetric (\(A=A^T\)) and skew-symmetric matrix (\(A=-A^T\)), so we can partion \(T_{\mathcal{A}}(I)\) into these two spaces. The Lie algebra of skew-symmetric matrices is the tangent space of the orthogonal group \(\mathbb{O}(m)\), so we’ll have to consider full subspace. Using the symmetry property, this subset is isomorphic to the \(\binom{m}{2}\) dimensional vector space that defines the entries above (or below) the diagonal.

I hope through this article I’ve made a case for atomic norms. The framework allows us to reduce the complexity of a recovery problem for arbitrary atomic sets to a Gaussian width computation. Computing the Gaussian widths can still be a hard problem (just like computing the Radermacher complexity), but they provide several useful properties that make these calculations easier. From the few examples I have seen, the Gaussian width calculation requires you to fairly mechanically decompose the tangent cone into spaces that are fairly easy to describe.